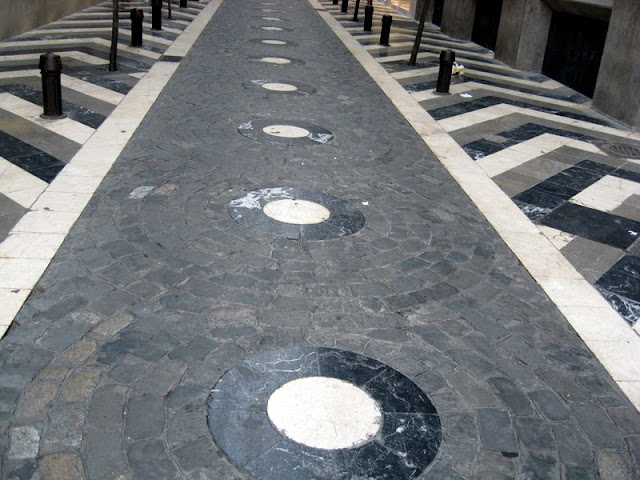 Whether they jog to the right or zig-zag to the left or simply continue straight ahead, one detail is consistent about Spain's streets and sidewalks--they are delightfully crafted of  beautiful materials. 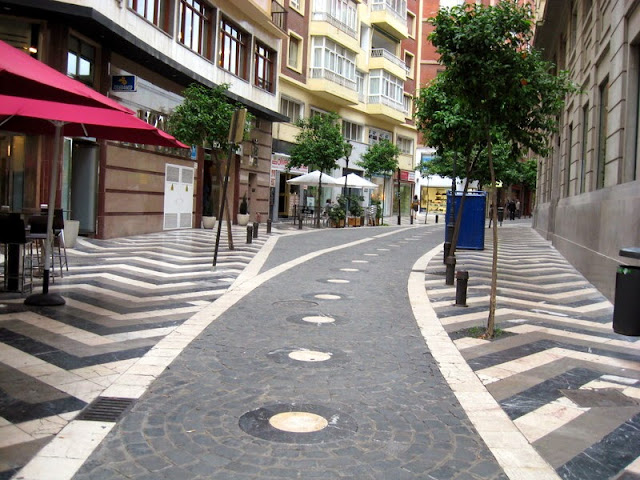 Marble, granite, brick or tile is arranged to be noticed in patterns that make a tourist want to watch his step. 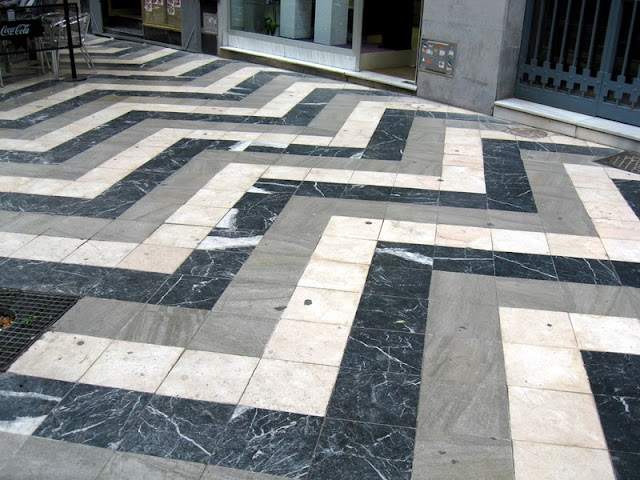 And the cities must budget considerable amounts to keep their streets so clean.  David and I have seen the cleaning machines, along with men and brooms, sweep our Nogalera Plaza in the early morning hours, and, judging by the pristine city streets, they must also work there on a regular basis. 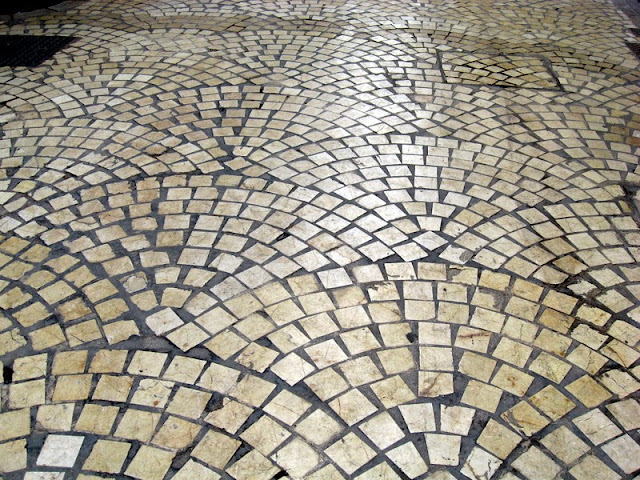 Or, maybe there isn't much trash to begin with.  Spain is dotted with recycling containers along with trash bins, so perhaps the populace learns not to litter at an early age. 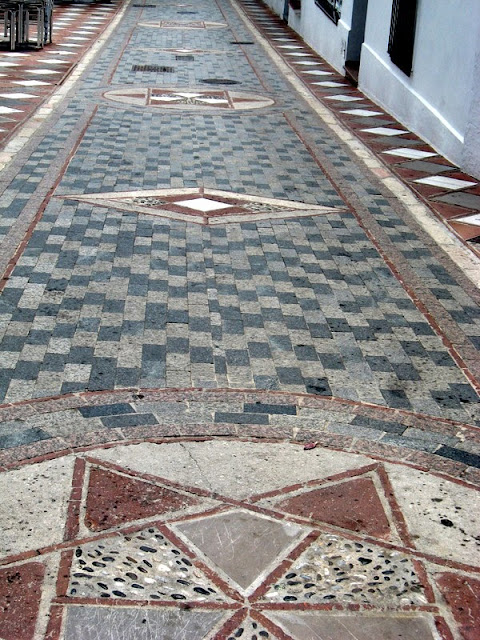 Or, maybe when streets are works of art, people wouldn't dream of sullying them with anything but their footprints!
Posted by Dru at 10:26 AM

Johnny Jet Book of the Week!!

It's now possible to travel in Europe for less than you would have spent five years ago! How does a round-trip flight to Europe for $565 sound? And while we've always been able to sleep for cheap, there are now more inexpensive choices than ever. Europe on a Dime: Five-Star Travel on a One-Star Budget will show you exactly how to fly for free (or very cheaply), rent an inexpensive yet luxurious apartment, and maximize your pleasure while you minimize your budget.

When we Baby Boomers* think about touring Europe, we are grateful the days when we carried all our clothes in a backpack and traipsed down the hall to a communal bathroom are long gone, but we wish we could still travel for that $5 a day Arthur Frommer wrote about. We long for a comfortable apartment that's as cheap as a private room in a hostel and gourmet meals for the price of McDonald's hamburger combos.

Most tour companies tell us those desires are unrealistic. They want us to think that travel has to cost hundreds of dollars a day and that professional guidance is needed to plan such trips.

Nothing is further from the truth.

I wrote my book, Europe on a Dime: Five-Star Travel on a One-Star Budget, because I know anyone willing to invest a little time and effort can travel as cheaply, and as comfortably, as I do. Planning isn't difficult, but you do need to learn a few tricks.

Everyone, regardless of income, should have the benefit of exploring other countries and cultures. If you implement the steps in my book, you will be able to travel frugally, comfortably, and frequently to Europe.

Click on the link below to read more about my book and what it can do for you.

*I wrote this book with Baby Boomers in mind because there are no books on the market to help them plan frugal, yet comfortable, trips. But anyone, of any age, can save money and travel well following the steps in the book. Whether you are eighteen or eighty, this book can help you travel cheaply and stylishly!

Listen to an interview with Dana Hersey on the Boston radio show, Retire Radio, where we talk about travel, travel tips, and my book, Europe on a Dime: Five-Star Travel on a One-Star Budget. Cut and paste this url: https://www.dropbox.com/sh/g39p3rubfs30d1s/bXEaEkkSGU/aircheck%20Dru%20Pearson%20Travel%201-6-13.mp3

The updated 2019 version with the latest rules governing retirement in Mexico is now available!

Does a year-round temperate climate, a cost-of-living half the US average, and maid service for $10 a day sound tempting? Then Mexico might be the place for you!

Thousands of expatriates from the US, Canada, and Europe call central Mexico home for good reason. It's exotic, yet only a day's drive from Texas; it's perpetually spring, so heating and air conditioning are unnecessary; it's genuinely "foreign," yet world-class, cosmopolitan beach resorts are within easy reach; it's a unique retirement locale, yet there are enough expat services to make you feel at home; and the violence you've heard about, while real, is confined to the border cities and rarely affects anyone in the expat communities. In short, Mexico is a haven for anyone seeking an inexpensive, comfortable yet exciting, retirement.

Learn about this utopia and find out how you can make the move yourself by reading my updated book, new for 2014, Retire in Mexico--Live Better for Less Money.

Retire in Mexico--Live Better for Less Money and Europe on a Dime: Five-Star Travel on a One-Star Budget are both available at Amazon and Barnes & Noble in paperback or e-book.

Use the search box below to quickly and easily locate articles in this blog and on the web.

Arthur Frommer, the founder of Frommer's Travel Guides, thrilled me today by saying some very kind words about my blog:


A retired schoolteacher named Dru, traveling to Europe with her live-in boyfriend, has written a memoir of their experiences in renting a Parisian apartment and a country cottage in the Dordogne of France. Her several essays, which appear at Tightwadtravel.blogspot.com, provide a strong confirmation of the advice I offered in a recent post, arguing that the recent sharp decline in the value of the U.S. dollar has made apartment living the only practical alternative for many cost-conscious American travelers.

Dru found her kitchen-equipped, Left Bank apartment through www.beauparis.com. It cost them 660€ (about $1,000) for 10 nights. Shopping for savory French food in colorful nearby markets, she and her partner averaged $18 per day in dining costs for the two of them -- and had a memorable culinary adventure, devouring the most savory breads and pastries, unbelievable cheeses, awesome patės and roasts in Paris. They avoided what would have been hundreds of extra dollars in restaurant bills. By leading an active life in the French capital -- shopping for their meals, cooking, wandering on foot everywhere they went, visiting countless, far-flung museums and attractions -- they also each lost eight pounds!


They rented their gîte in Dordogne through www.visitperigord.com, spending 290€ (about $460) for seven nights. There, too, they lived like residents of France, walking to markets, making friends with shopkeepers, learning endless tactics of fine dining, experiencing local life.

Dru's several essays are accompanied by excellent photos of the food shops they patronized and, sometimes, of the meals they prepared. Those reminiscences appear following an opening reference by Dru (who doesn't otherwise supply her name; she and David now live in San Diego) to my own blog about the advisability of living in a European residence (primarily an apartment) rather than a hotel. She also comes down hard on organized tours -- and in favor of completely independent travel.

Though I'm a bit prejudiced, I think you'll be fascinated by the adventures of this divorced ex-mom. And I believe it will cause you to choose an apartment over a hotel room for your own next trip to Europe.

The series of articles begins in July with the outline of our plans for the trip, and some August articles deal with the final preparations. See Archives by Subject below.

In September and October, the posts are "live" from France.

You will find a summary of our expenses here and some final thoughts in October articles.

This link takes you to a description of our Paris apartment.

Have you got a hankering for frugal travel tips?

Do you want to know how to travel cheaply without sacrificing comfort?

Would you like to learn how to live frugally so more of your dollars can be saved for vacations?

Are you an armchair traveler who likes to read about adventures from the comfort of your office?

Then this blog is for you.

Dru
I'm a former English teacher who's always suffered from wanderlust. Living four years in Mexico helped, but the wanderlust is incurable and, seemingly, insatiable. I want 365 days of travel a year. The Tightwad Travel blog is my medicine.